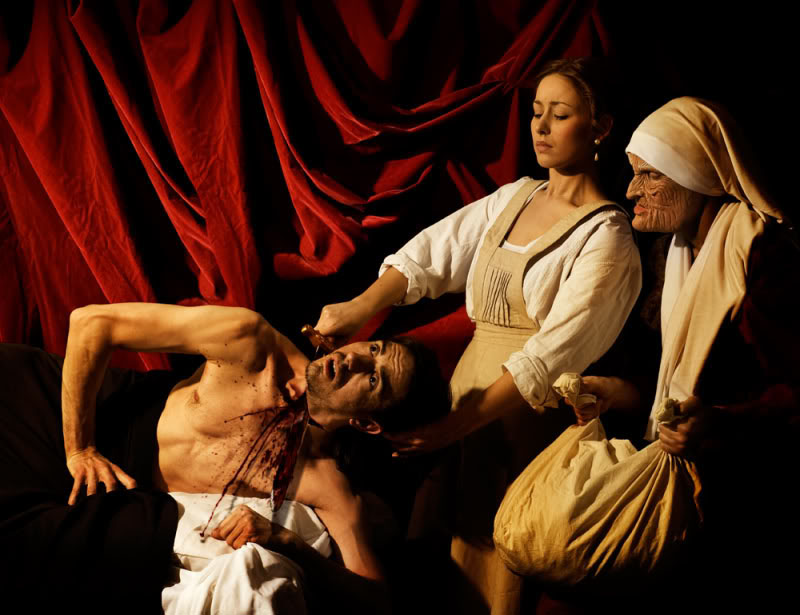 Michelangelo Merisi (or Amerighi) da Caravaggio (Italian pronunciation: [kara?vadd?o]; Milan, 29 September 1571 – 18 July? 1610) was an Italian painter active in Rome, Naples, Malta, and Sicily between 1592 (1595?) and 1610. His paintings, which combine a realistic observation of the human state, both physical and emotional, with a dramatic use of lighting, had a formative influence onBaroque painting.

Caravaggio trained as a painter in Milan under Simone Peterzano who had himself trained under Titian. In his twenties Caravaggio moved to Rome where there was a demand for paintings to fill the many huge new churches and palazzos being built at the time. It was also a period when the Church was searching for a stylistic alternative to Mannerism in religious art that was tasked to counter the threat of Protestantism. Caravaggio's innovation was a radical naturalism that combined close physical observation with a dramatic, even theatrical, use of chiaroscuro which came to be known as tenebrism (the shift from light to dark with little intermediate value). 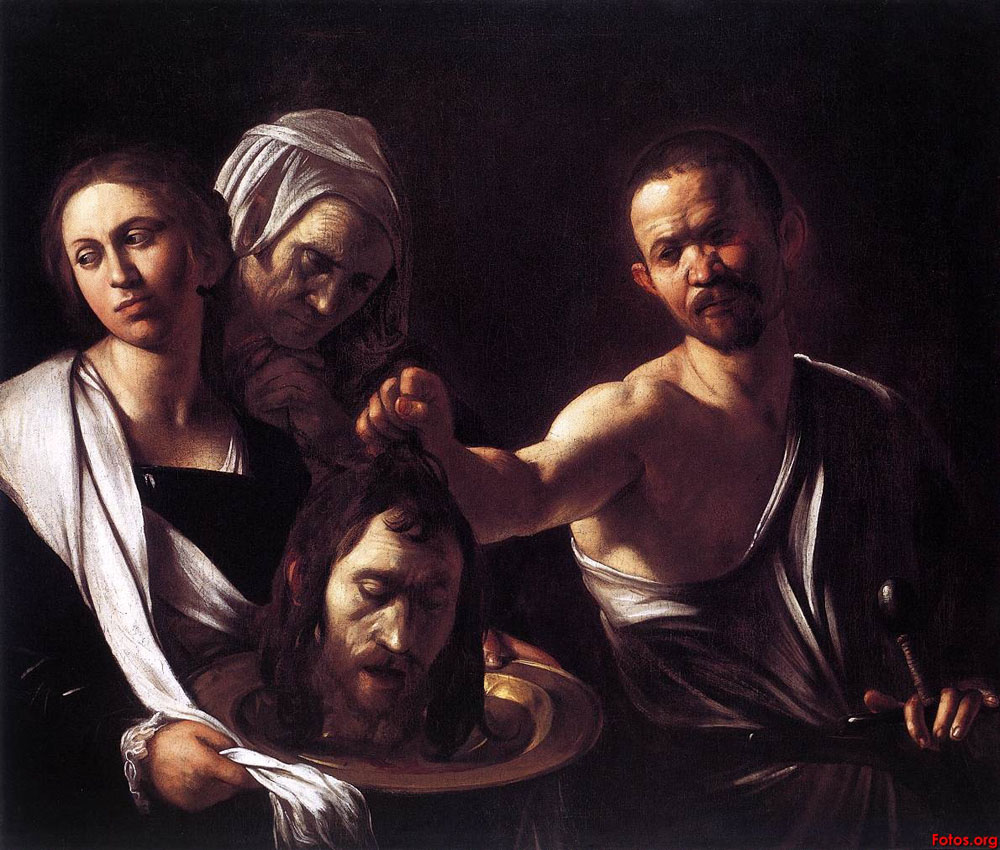 Salome with the Head of St John the Baptist

He burst upon the Rome art scene in 1600 with the success of his first public commissions, the Martyrdom of Saint Matthew andCalling of Saint Matthew. Thereafter he never lacked commissions or patrons, yet he handled his success poorly. He was jailed on several occasions, vandalized his own apartment, and ultimately had a death warrant issued for him by the Pope after killing a young man, possibly unintentionally, on May 29, 1606. 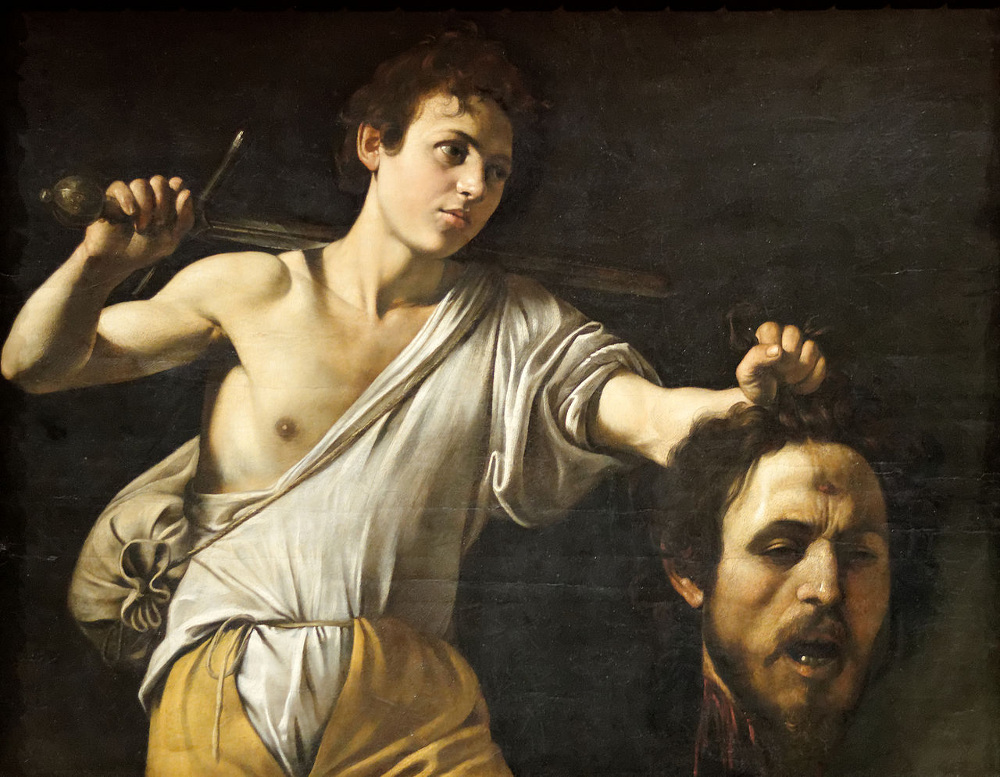 An early published notice on him, dating from 1604 and describing his lifestyle three years previously, recounts that "after a fortnight's work he will swagger about for a month or two with a sword at his side and a servant following him, from one ball-court to the next, ever ready to engage in a fight or an argument, so that it is most awkward to get along with him." In 1606 he killed a young man in a brawl and fled from Rome with a price on his head. He was involved in a brawl in Malta in 1608, and another in Naples in 1609, possibly a deliberate attempt on his life by unidentified enemies. This encounter left him severely injured. A year later, at the age of 38, he died under mysterious circumstances in Porto Ercole in Tuscany, reportedly from a fever while on his way to Rome to receive a pardon.

Famous while he lived, Caravaggio was forgotten almost immediately after his death, and it was only in the 20th century that his importance to the development of Western art was rediscovered. Despite this, his influence on the new Baroque style that eventually emerged from the ruins of Mannerism was profound. It can be seen directly or indirectly in the work of Rubens, Jusepe de Ribera,Bernini, and Rembrandt, and artists in the following generation heavily under his influence were called the "Caravaggisti" or "Caravagesques", as well as tenebrists or tenebrosi ("shadowists"). The 20th-century arthistorian André Berne-Joffroy claimed: "What begins in the work of Caravaggio is, quite simply, modern painting."

Caravaggio led a tumultuous life. He was notorious for brawling, even in a time and place when such behavior was commonplace, and the transcripts of his police records and trial proceedings fill several pages. On 29 May 1606, he killed, possibly unintentionally, a young man named Ranuccio Tomassoni from Terni (Umbria). The circumstances of the brawl and the death of Ranuccio Tomassoni remain mysterious. Several contemporary avvisi referred to a quarrel over a gambling debt and a tennis game, and this explanation has become established in the popular imagination. But recent scholarship has made it clear that more was involved. Good modern accounts are to be found in Peter Robb's M and Helen Langdon's Caravaggio: A Life. An interesting theory relating the death to Renaissance notions of honour and symbolic wounding has been advanced by art historian Andrew Graham-Dixon. Previously his high-placed patrons had protected him from the consequences of his escapades, but this time they could do nothing. Caravaggio, outlawed, fled to Naples. There, outside the jurisdiction of the Roman authorities and protected by the Colonna family, the most famous painter in Rome became the most famous in Naples. His connections with theColonnas led to a stream of important church commissions, including the Madonna of the Rosary, and The Seven Works of Mercy. 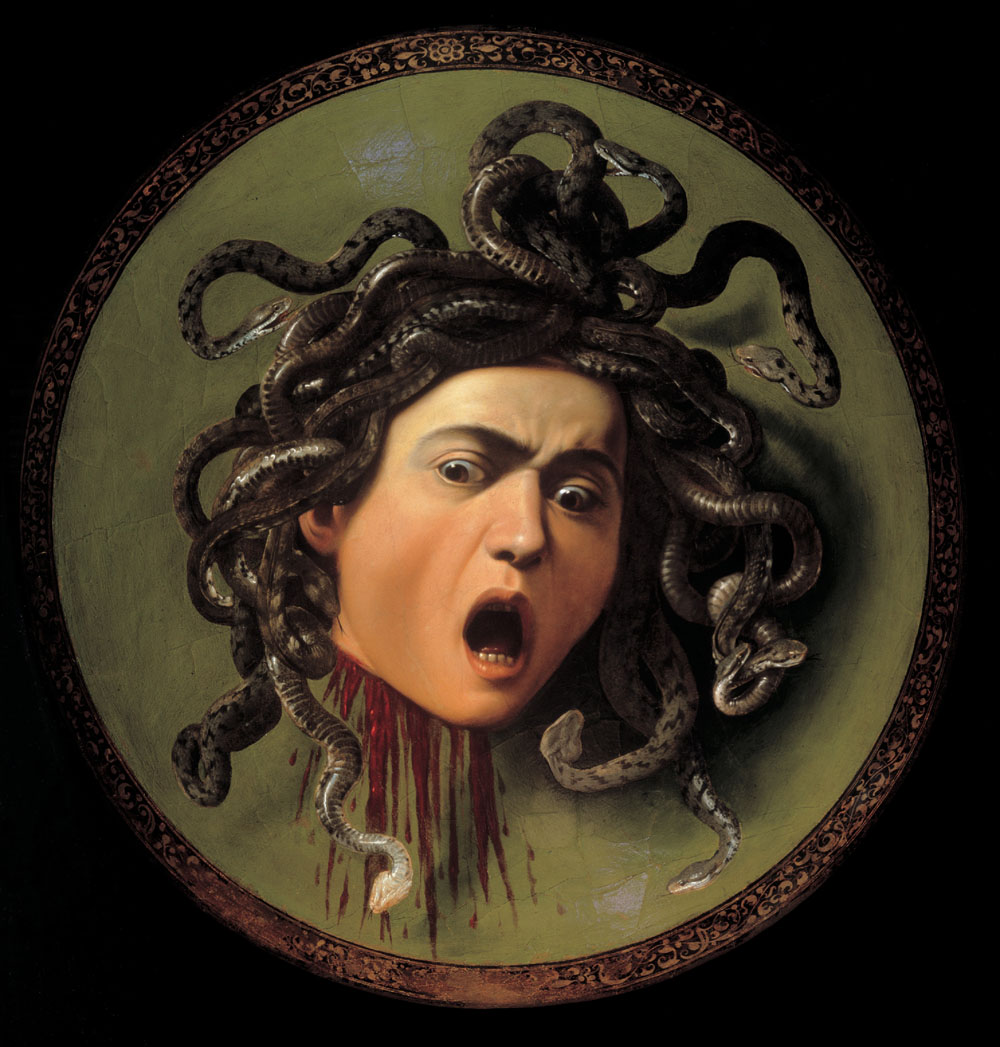 Despite his success in Naples, after only a few months in the city Caravaggio left for Malta, the headquarters of the Knights of Malta, presumably hoping that the patronage ofAlof de Wignacourt, Grand Master of the Knights, could help him secure a pardon for Tomassoni's death. De Wignacourt proved so impressed at having the famous artist as official painter to the Order that he inducted him as a knight, and the early biographer Bellori records that the artist was well pleased with his success. Major works from his Malta period include a huge Beheading of Saint John the Baptist (the only painting to which he put his signature) and a Portrait of Alof de Wignacourt and his Page, as well as portraits of other leading knights. Yet by late August 1608 he was arrested and imprisoned. The circumstances surrounding this abrupt change of fortune have long been a matter of speculation, but recent investigation has revealed it to have been the result of yet another brawl, during which the door of a house was battered down and a knight seriously wounded. He was imprisoned by the knights and managed to escape. By December he had been expelled from the Order "as a foul and rotten member."

Caravaggio made his way to Sicily where he met his old friend Mario Minniti, who was now married and living in Syracuse. Together they set off on what amounted to a triumphal tour from Syracuse to Messina and, maybe, on to the island capital, Palermo. In Syracuse and Messina Caravaggio continued to win prestigious and well-paid commissions. Among other works from this period are Burial of St. Lucy, The Raising of Lazarus, and Adoration of the Shepherds. His style continued to evolve, showing now friezes of figures isolated against vast empty backgrounds. "His great Sicilian altarpieces isolate their shadowy, pitifully poor figures in vast areas of darkness; they suggest the desperate fears and frailty of man, and at the same time convey, with a new yet desolate tenderness, the beauty of humility and of the meek, who shall inherit the earth."Contemporary reports depict a man whose behaviour was becoming increasingly bizarre, sleeping fully armed and in his clothes, ripping up a painting at a slight word of criticism, mocking the local painters.

After only nine months in Sicily, Caravaggio returned to Naples. According to his earliest biographer he was being pursued by enemies while in Sicily and felt it safest to place himself under the protection of the Colonnas until he could secure his pardon from the pope (now Paul V) and return to Rome. In Naples he painted The Denial of Saint Peter, a final John the Baptist (Borghese), and his last picture, The Martyrdom of Saint Ursula. His style continued to evolve — Saint Ursula is caught in a moment of highest action and drama, as the arrow fired by the king of the Huns strikes her in the breast, unlike earlier paintings which had all the immobility of the posed models. The brushwork was much freer and more impressionistic.

In Naples an attempt was made on his life, by persons unknown. At first it was reported in Rome that the "famous artist" Caravaggio was dead, but then it was learned that he was alive, but seriously disfigured in the face. He painted a Salome with the Head of John the Baptist (Madrid), showing his own head on a platter, and sent it to de Wignacourt as a plea for forgiveness. Perhaps at this time he painted also a David with the Head of Goliath, showing the young David with a strangely sorrowful expression gazing on the severed head of the giant, which is again Caravaggio's. This painting he may have sent to his patron the unscrupulous art-loving Cardinal Scipione Borghese, nephew of the pope, who had the power to grant or withhold pardons. 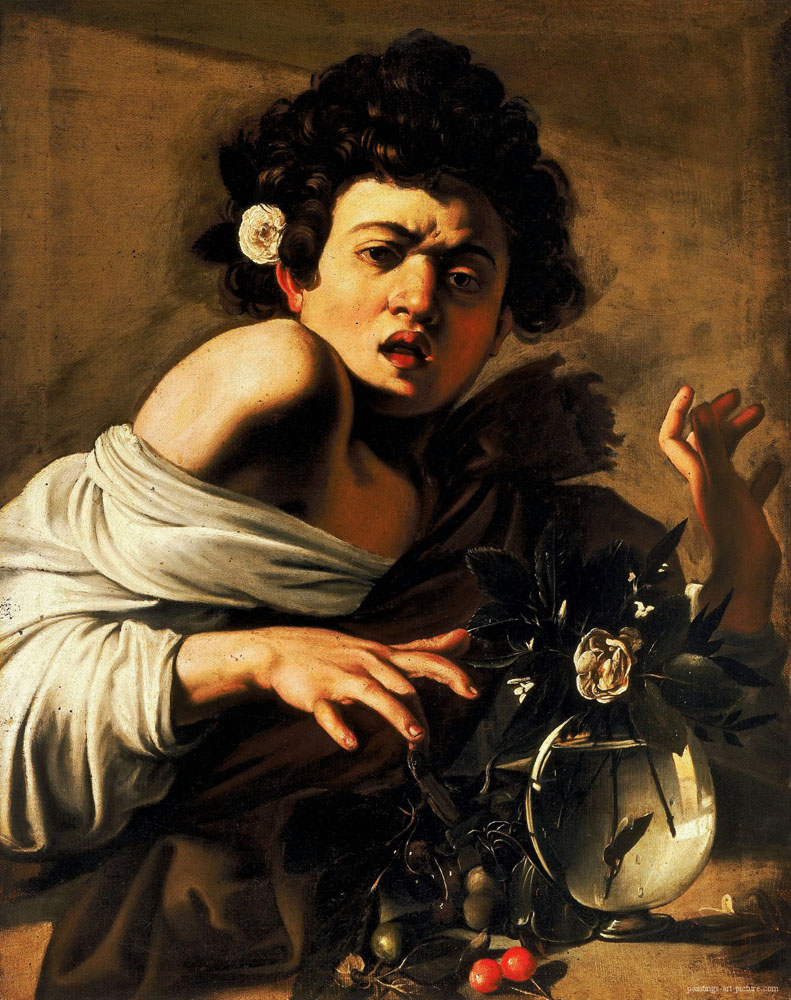 Some scholars argue that Caravaggio was murdered by the same "enemies" that had been pursuing him since he fled Malta, possibly Wignacourtand/or factions in the Order of St. John. Caravaggio might have died of lead poisoning. Bones with high lead levels were recently found in a grave likely to be Caravaggio's. Paints used at the time contained high amounts of lead salts. Caravaggio is known to have indulged in violent behavior, as caused by lead poisoning.In the summer of 1610 he took a boat northwards to receive the pardon, which seemed imminent thanks to his powerful Roman friends. With him were three last paintings, gifts for Cardinal Scipione. What happened next is the subject of much confusion and conjecture. The bare facts are that on 28 July an anonymous avviso (private newsletter) from Rome to the ducal court of Urbino reported that Caravaggio was dead. Three days later another avviso said that he had died of fever on his way from Naples to Rome. A poet friend of the artist later gave 18 July as the date of death, and a recent researcher claims to have discovered a death notice showing that the artist died on that day of a fever in Porto Ercole, nearGrosseto in Tuscany. Human remains found in a church in Porto Ercole in 2010 are believed to almost certainly belong to Caravaggio. The findings come after a year-long investigation using DNA, carbon dating and other analyses.